Lockdown Over - All Retails Stores Back To Normal - WooHoo!!!

As a MTL RTA this is ok but not the best IMHO. The airflow is reasonably tight but still a little looser than my preference and for a 23mm RTA the 2ml capacity is annoying. Otherwise, looks great and is not overly expensive.

As usual, VAPR were brilliant with everything to do with my order. Excellent company to deal with in every way.

This is my first dedicated MTL RTA and I couldnt be happier with it. Really well put together, super easy to build/wick and the flavour is fantastic. The draw can go from super tight to loose MTL and is smooth and quiet across the whole range.
Airflow ring can be a little bit hard to grab properly and turn, but that is preferable to being too easy/loose and getting bumped around. Only 2ml capacity which isnt much considering the height, but bubble glass is available.
Overall, very happy with it and would highly recommend!

this is my first ever rta, instantly built it and wicked it up, put it on my trusty Adept mod and closed the airflow to just 1 air hole.
And then fell in love from the first hit, thank you Vapr for your amazing service and quick delivery, stay safe and stay healthy 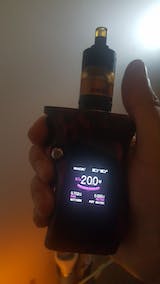